Had a lot of fun in the north pasture cutting down some gnarly trees....the goats enjoyed it too!
Posted by Julie at 3:31 PM

It’s Winter and with that comes dry skin.  Our new Intense Moisture Cream is the answer.  It has five times the amount of Shea Butter our lotion has. 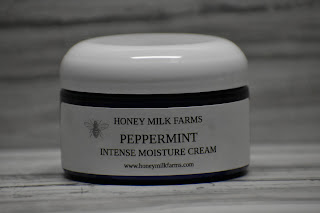 Currently we have Peppermint, Honey Almond and Baby Talc available - our other fragrances will be available soon.

We’ve had a few days now with temperatures getting into the 50’s.  It’s a nice change from the cooler than normal temperatures we had been having.  I was beginning to think Winter came early.  The bees took advantage of the warmer day and buzzed around....

Honey Milk Farms wishes you all a very Happy Thanksgiving! 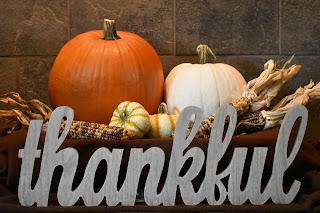 Want to know more about our lotions - visit our Soaps & Lotions page.
Posted by Julie at 7:18 AM

First Snow of the Season

It's snowing at Honey Milk Farms!  It's our first snow of the season.  The goats are tucked away in the barn and are content to stay there and just watch the snow.  The cows don't seem to have even noticed. 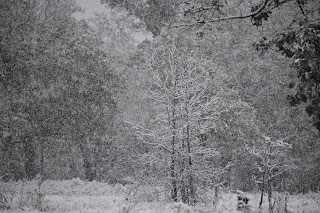 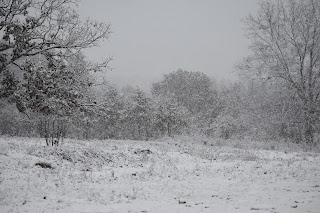 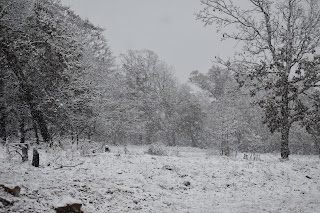 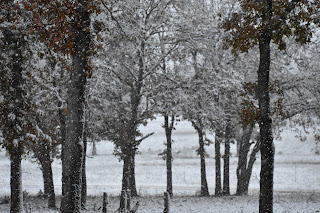 We're having "Black Friday" specials, but we are having them starting today for every weekend until Christmas.  Sale items are limited quantities, so once they are gone the sale is over.  Each weekend will have a new item!  This weekend we have 3.5 ounce Lavender soap for 99 cents! To order click on the link:   Honey Milk Farms On-line Store
Posted by Julie at 10:12 AM 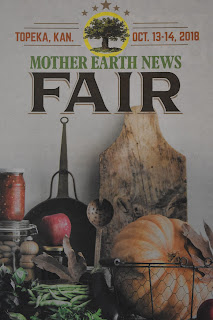 Mother Earth News Fair!  Day one - Before daylight after completing morning farm chores, I set out on the four hour drive from the Honey Milk Farms to Topeka, Kansas armed with lots of cold brewed coffee!
Posted by Julie at 9:38 AM

While doing some maintenance in the cow's winter pasture, I noticed Zena (Anatolian Shepherd) biting and snapping at something in the shorter grass.  Whatever it was had her jumping backwards after each snap.  Figured she had a snake and so I went closer to investigate.  It was no snake, but one of the most frightening-looking creatures I have ever seen up close and personal.  At the time I didn't know what it was or if it was poisonous.  Not taking any chances I scooped it into a bucket.  Mind you, NOT with bare hands! Good thing - after a little research, I realized just how bad this creature was.  It was a Giant Redheaded Centipede (GRC).  Also known by it's scientific name, Scolopendra heros.  The venom of the GRC is highly potent, extremely painful and can cause swelling.  The GRC is usually around 6-9 inches long - our "guy" is on the smaller end - a mere 6.5 inches (Note: length is approximate - didn't get that close for an exact measurement).  Each of the feet look like sharp daggers or fangs and can leave cuts in the skin which are irritated by the venom.  There are no "confirmed" human deaths due to the GRC's venom, but the GRC's bite can cause nausea, headache, skin necrosis, and in some extreme cases can cause kidney failure and heart attacks*. When GRCs get irritated or on alert the last two appendages rise into the air and can grab.  At first, I mistakenly took these as it's head.  The GRC likes to live under rocks or logs and eat small mammals, reptiles, amphibians and insects.  Know enough now that this is one creepy crawly I don't want to tangle with - Thanks Zena for your ever watchful ever protective self!

*information from on-line source, Wikipedia
Posted by Julie at 6:30 PM

The acorns have begun to fall and the goats are loving it!  They literally race to the back of the property where it is mostly wooded and gobble the acorns as they fall.
Posted by Julie at 6:48 PM

Today my passes/wristbands for the Mother Earth News Fair in Topeka, Kansas on October 13th and 14th arrived!  Beyond excited!  Sixteen days and a four hours drive away!  There are many amazing speakers on the Mother Earth News roster and two that I am especially excited about - Temple Grandin and Leo Sharaskin!  Little background - years ago, before owning cattle, we heard about Temple Grandin and her amazing low stress ways to handle cattle.  We bought her book, "Humane Livestock Handling," and watched the show based on her life.  Temple Grandin's methods are revolutionary and make working with cattle so much easier because we work "with" the cows not "against" them.  Highly recommend both the book and the movie - I will be giving a more in-depth review on the book and posting in the 'Book Review' page down the road.  Equally excited about Leo Sharaskin, editor of "Keeping Bees with a Smile."  Which is one of my top beekeeping books and has changed how we at Honey Milk Farms will be raising our bees.  Also a book I highly recommend and will be reviewing in depth at a later date.

There is a new review on our the Book Review page - the "Four Season Harvest."  I have been using the book right now as I am planning and working on Phase I of our garden relocation.
Posted by Julie at 3:13 PM

This morning I sat on the back porch, drinking coffee and wearing a jacket! Temperatures in the low 60s and the overcast sky are just screaming FALL is right around the corner! Now, I can't remember when the last time or if there ever was a time I was wearing a jacket in the middle of September. While sitting there I noticed something dark moving in the south pasture amidst the brush. My first thought was "uh oh" coyotes are moving, which would have unusual, but the cooler temperature could be a factor. Within a few minutes, there were multiple dark moving creatures. Then, out in the open walks a beautiful giant Tom turkey and behind him several hens and a couple smaller Toms or perhaps Jakes (Jake another name for a male under a year old). They were quite a ways away, but I was able to get close enough for a photo before they sauntered off into the woods. 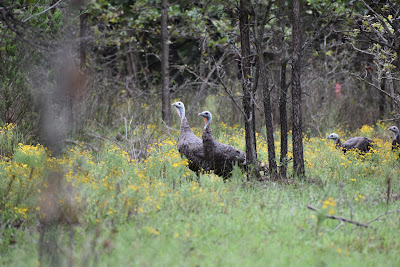 We now have our Sensitive Skin in the 5oz bars available.  Our smaller bars are still on sale but going FAST!  See what's available by clicking on the link for the on-line store:
Honey Milk Farms on-line store
Posted by Julie at 4:56 AM

Hoof trimming - Buttercup gets a manicure

So my friends, Tadd and Kim, recently moved to some amazing acres out in the country.  They got a couple of llamas and then added a beautiful little donkey, Buttercup, and her adorable two month old baby, Nugget. 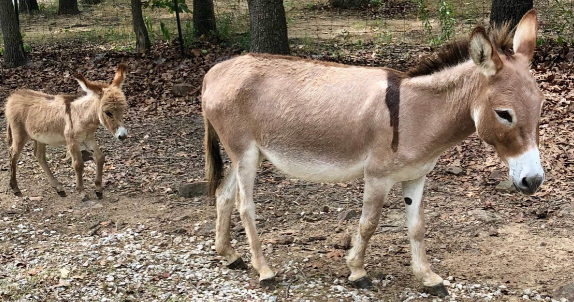 Buttercup needed a manicure as her feet had been neglected by her previous owner.  Her front hooves had grown too long and then broke off in places.

Buttercup was patient for about all of ten minutes - just long enough for me to get one of the front feet clipped and rasped.  She wanted no part of us messing with the second front hoof and back feet were out of the question.


First foot done, Miss Buttercup decided she had had enough and layed down on us.  Little did she know that wouldn't get her out of getting her other feet done.  It actually made it easier on all of us!


After the trimming was done, Miss Buttercup got a good slathering of Hooflex on all sides and the bottom of her hooves.
Success!!! Buttercup's feet are in much better shape.  Tadd and I, well, let's just say Miss Buttercup is amazingly accurate in locating her targets and making impact with her strong hard hooves.  No real harm done and grateful Buttercup wasn't any bigger!  Thanks Kim for all the amazing photographs!!


So, after a little thunderstorm passed through, I looked out of my kitchen window.  I noticed one of the nearby trees looking quite odd.

Upon closer inspection - the bark was not peeled, it was blown off, we are talking EXPLOSION!  Pieces and strips of bark everywhere.

The tree is less than 25 yards from the house and there were pieces of bark actually on the back porch. 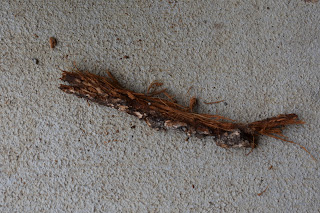 Fun fact:  Lightning can cause temperatures in excess of 50,000 degrees F!  When it hits a tree as in this case, the extreme temperatures cause the sap in the tree to boil.  The pressure builds and voila - bark explosion.

Time to stock up!  We are currently changing our soap.  Our soap will still be made with the same great recipe with moisturizing oils, Shea butter and milk from our Saanen dairy goats.  What's changing?  Our soap will now come in 5 ounce ovals.  So, we are discounting all of our soap inventory to make room for our new and improved soaps!  All soaps that have essential oils have been discounted to $2.75 and our unscented soaps and those with fragrance oil are now $2.50.  In addition, we have dropped our shipping charge to a flat $5.00 no matter how large the order.  Visit our online store to see what is available!
Posted by Julie at 6:26 PM

Woke up this morning to the sound of thunderstorms - Very Thankful!  Our grass was just beginning to get "crispy."  It's been a while since we had any rain of any real noticeable amount.  Only one inch in the rain gauge today, but we are thankful for every drop!  This time of year is normally a dry time, but lately it seems what little the rain has been nearby has gone either to the north or south of us.  It amazes me how the grass can look almost dead and with just a little rain, it springs back into new life.

It's so funny how differently the cows and goats react to rain.  The cows could not care less and actually act as if they like it.  The goats duck and hide, as if the rain will make them melt.  The first hint of rain and they are running for the barn.  Surprisingly, when we had the Boer meat goats, they didn't seem to avoid rain like the dairy goats do.

Still in the process of updating all the pages.  I added a new page - "Goat Milk" which contains some cool links to articles about the benefits of goat milk.  The 'About Us' page is now up to date!
Posted by Julie at 6:23 PM

Very excited!  Spent a lot of time trying to get back up and running.  I'm technologically challenged so getting the website to do what I wanted was a feat!  I'll be updating the pages soon!
Posted by Julie at 7:03 PM